Start every business day with our analyses of the most pressing developments affecting markets today, alongside a curated selection of our latest and most important insights on the global economy.

Inflation Has Yet To Peak

U.S. inflation remained red hot in May, with consumer prices roaring to another four-decade high and putting more pressure on the world’s biggest economy.

Despite market participants’ expectations that inflationary pressures would begin cooling off, Bureau of Labor Statistics data released today showed that the U.S. endured another painful month of price pressures in May. Economists had forecast that inflation would stay unchanged from the 8.3% year-over-year rise in Consumer Price Index inflation seen in April, which was already approximately double the inflationary levels seen in the months ahead of the three previous recessions. But annualized inflation last month reached a new 40-year high of 8.6% and accelerated 1% month-over.

Prolonged price pressures are compounding challenges—for the Federal Reserve as it embarks on aggressive monetary-policy tightening, for the White House as it aims to gain a grip on gas prices, and for Wall Street as investors’ concerns over a recession rise.

The Fed is likely to announce a 50-basis-point rate hike next week at its June 14-15 meeting, according to S&P Global Ratings and S&P Global Market Intelligence. This move would be the third interest rate increase this year, following the central bank’s 25 bps hike in March and subsequent 50 bps hike in May.

“The huge jump in the Consumer Price Index in May kept year-over-year gains at a 40-year record high and will keep the Fed focused on taming the inflation beast this year,” S&P Global Ratings Chief North America Economist Beth Ann Bovino told the Daily Update today. “We expect another 50-bps rate hike at their June meeting, with two more 50 bps rate hikes to soon follow. We wouldn’t be surprised to see the Fed decide to rip off the band-aide with a 75 or 100 bps move later this year.”

However, the central bank’s ambitions to cool the U.S. economy down without freezing it are growing increasingly difficult as the likelihood of another recession rises, according to S&P Global Market Intelligence. S&P Global Ratings expects the Fed to raise interest rates a total of seven times this year—and currently sees a 30% chance of recession (within a range of 25%-35%) in the next 12 months.

“The Fed is in a major jam,” Oren Klachkin, lead U.S. economist with Oxford Economics, told S&P Global Market Intelligence. “They don’t want to let inflation spiral, but they also don’t want to kill the expansion. Finding the middle ground between those is hard, and their tools are blunt, so the task before them is monumental.”

Facing political pressure over elevated petroleum and diesel prices, the Biden Administration has sought alleviation by coordinating strategic petroleum reserve releases, petitioning the OPEC+ cartel to ramp up their production, and engaging with major oil market players like Saudi Arabia.

Against this backdrop of uncertainty, a near-term return to normalcy appears unlikely.

“We do think we can get into the ‘comfort zone’ sometime in 2023, which is to say lower inflation and a clear path towards, say, 2.5%,” Matt Peron, director of research at Janus Henderson Investors, told S&P Global Market Intelligence about how U.S. inflation may not reach pre-pandemic levels until 2024 at the earliest. “Much depends on the geopolitical backdrop, supply chain, as well as the level of demand.”

Today is Friday, June 10, 2022, and here is today’s essential intelligence. 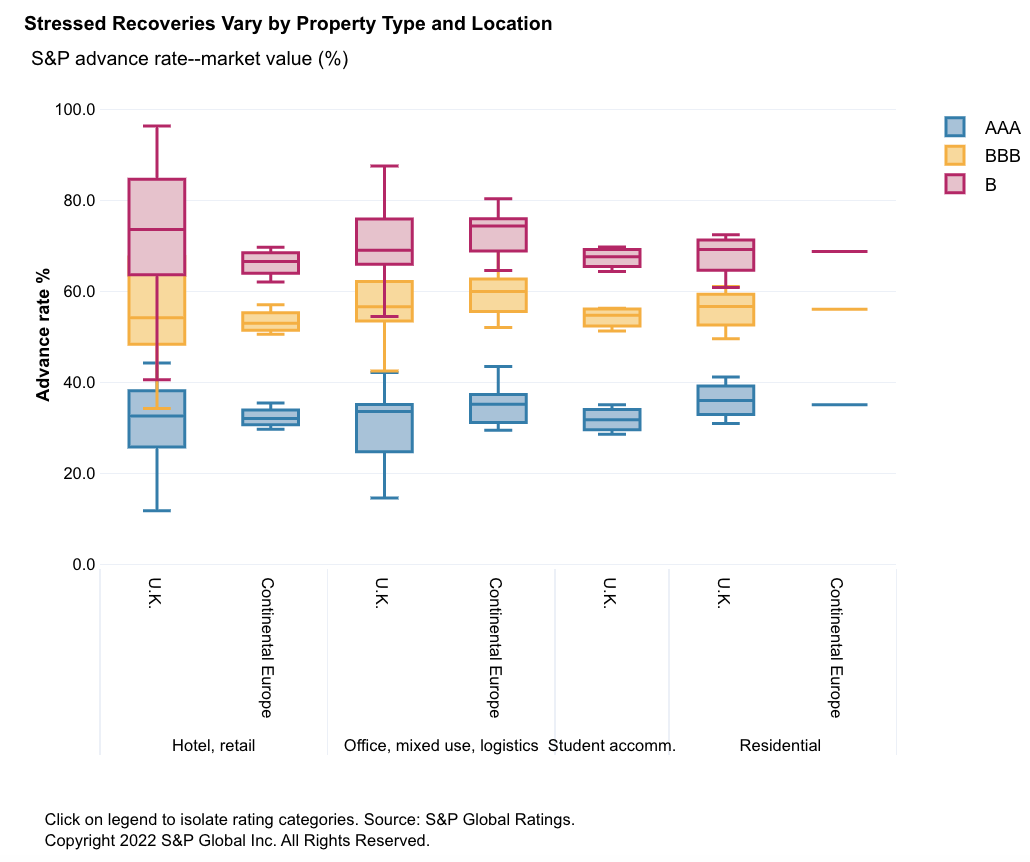 The ‘AAA’-rated notes in a commercial mortgage-backed securities transaction benefit from substantial credit enhancement or, equivalently, a relatively low advance rate. This protects investors from losses in all but the most severe downturns in underlying property values. Looking at newly issued transactions that we rated between 2018 and 2021, the median ‘AAA’ advance rate was 33.8%, and ranged between 11.8% and 44.3%. 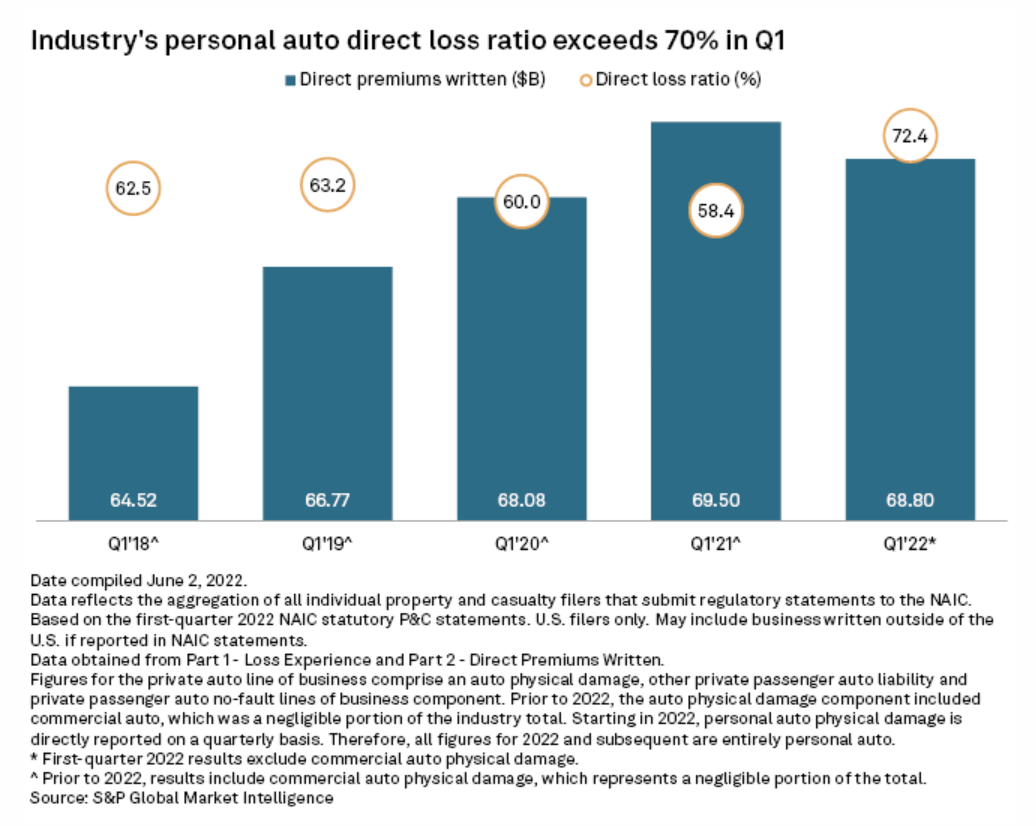 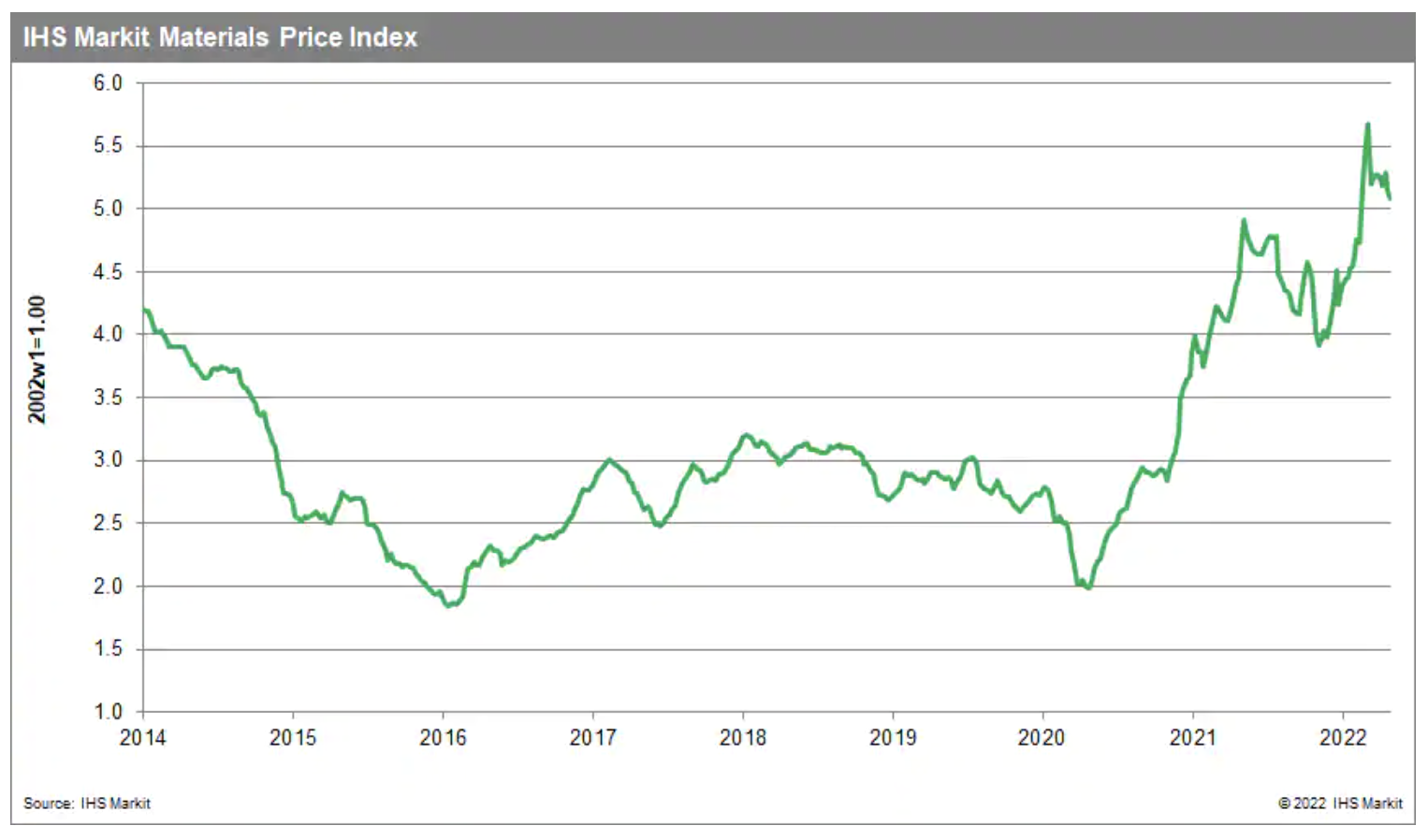 The Materials Price Index rose 1.4% last week, reversing the declines recorded during the previous week. Exactly half of the ten subcomponents in the MPI increased: evidence of the uncertainty permeating markets at present. That said, the general direction of commodity prices has been down over the past two months with the index now 12.3% lower than its all-time high established in early March.

Path To Net-Zero: Utility Execs Insist ‘We Can’ 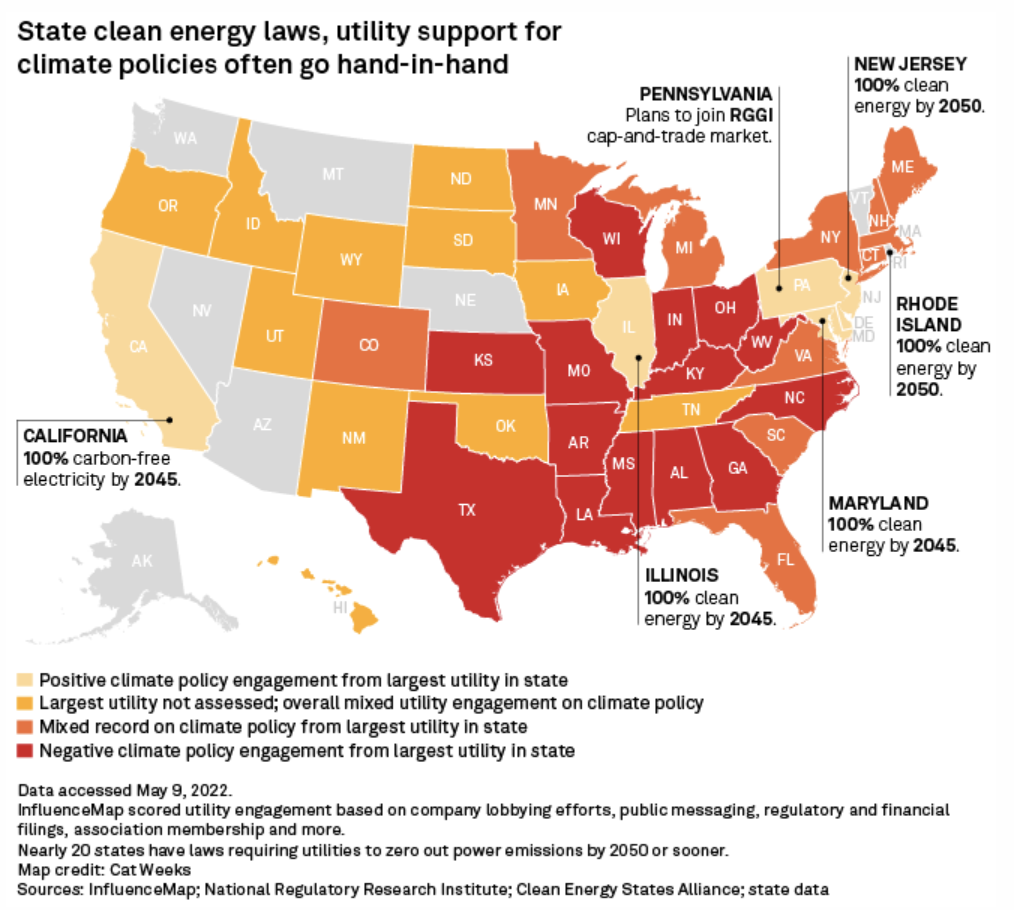 In 2018, Xcel Energy Inc. was praised by environmental advocates and Jared Polis, Colorado’s progressive governor-elect, for being the first major utility to set a net-zero emissions reduction goal for its power business. The Minneapolis-headquartered utility, which serves 3.7 million electricity customers and 2.1 million natural gas customers in eight states, this year upped that pledge. It has promised to cut carbon emissions from its electric utility businesses in Colorado and Minnesota by 85% in 2030 from 2005 levels and to reach net-zero emissions from both its power and natural gas operations by 2050. 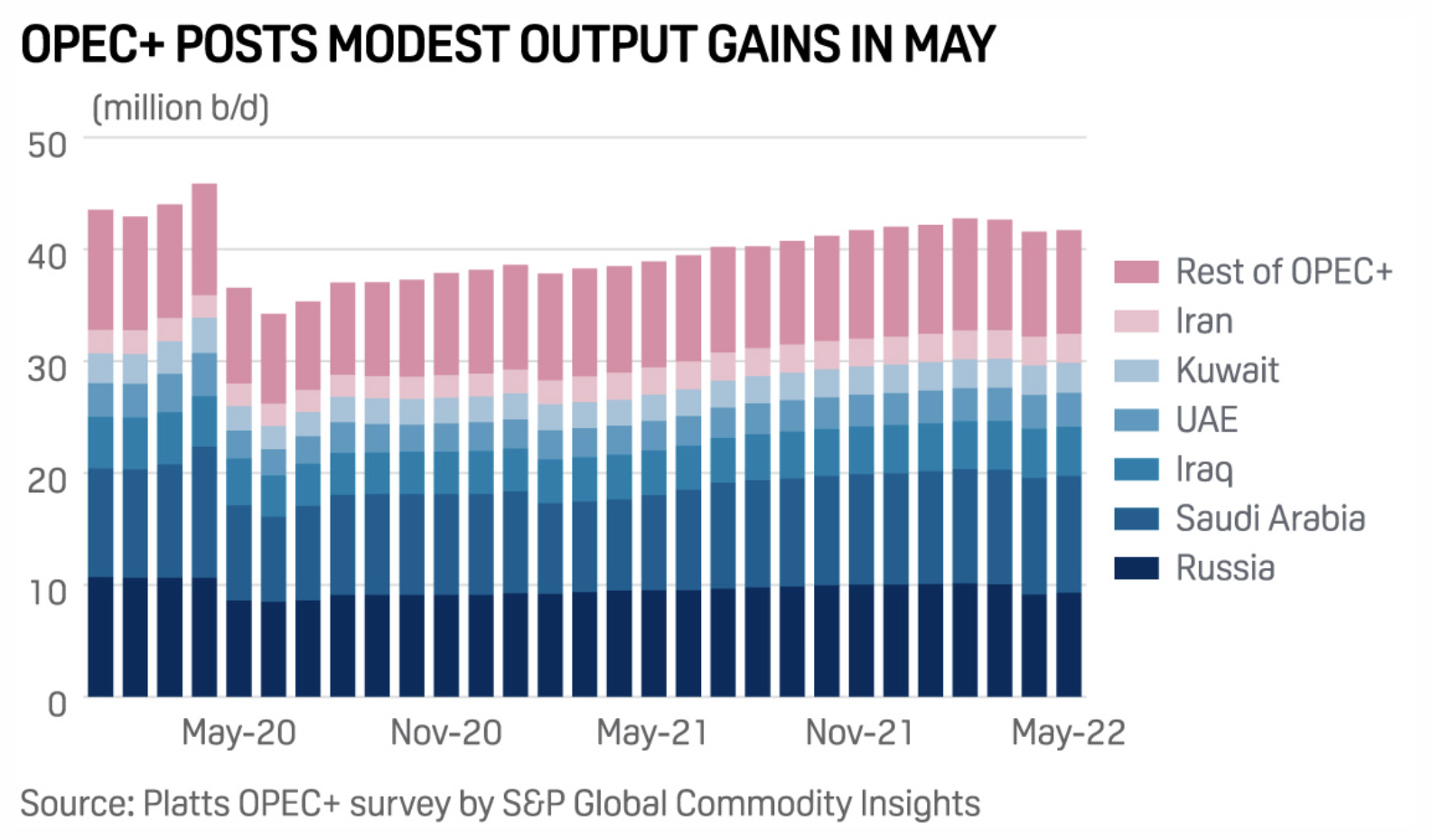 Crude oil production from OPEC and its Russia-led allies rebounded modestly in May from a steep drop in April but remains well short of its collective quotas, according to the latest Platts survey by S&P Global Commodity insights, highlighting the group’s continuing struggles with sanctions and unplanned outages. 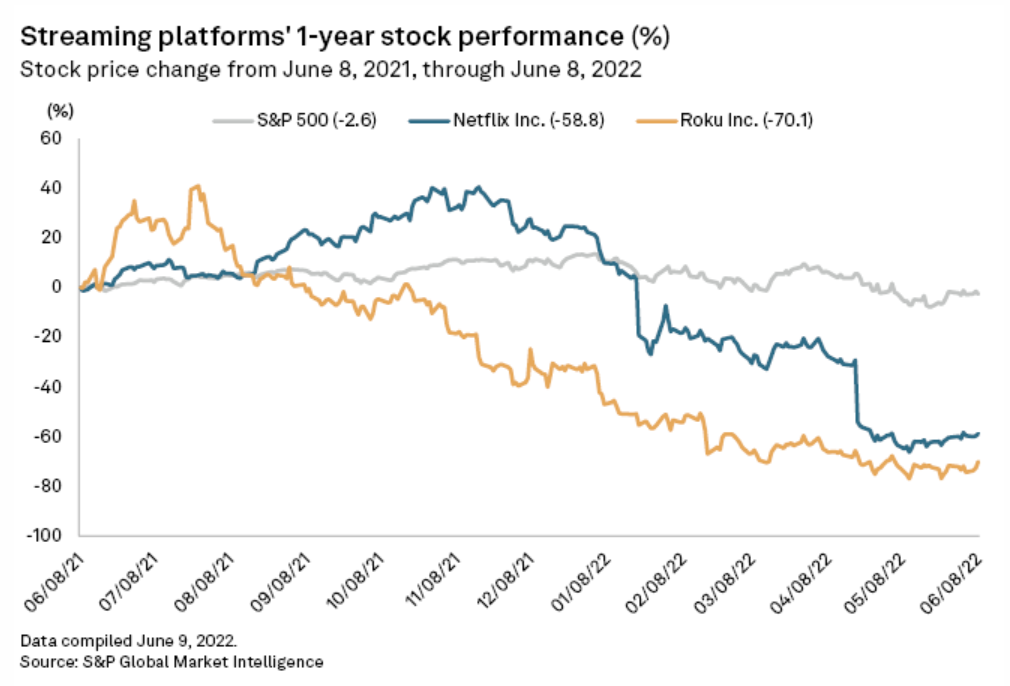 Investors piled into Roku Inc. on June 8 after reports that Netflix Inc. may acquire the company. A day later, they piled out. Roku closed on June 8 up about 9%. On June 9, shares closed down a little more than 9%. Netflix shares added about 2% on June 8, only to end down almost 5% on June 9.

Inflation Has Yet To Peak

Previous articleIC Title Match, MITB Qualifiers
Next articleAt what age should I get life insurance?

Image Source: PexelsInsurance companies are a group that will continually be in demand. People will always have...
Life Insurance

Image Source: PexelsInsurance companies are a group that...

Image Source: PexelsInsurance companies are a group that...