4 For The Cramer: Arthur, Freshour, Crider, Utterback picked for award


Three veteran coaches and local sports legend are this year’s recipients of the Jack Cramer Ideals of Athletic Compeition Award.

Instead of honoring just one male and one female this year, as it has done in most years, the Cramer committee went with a team winner, along with a separate male and female. Longtime Columbus North gymnastics coaches Bob Arthur and Sandy Freshour are the team winners and are joined by former North and Columbus East assistant and current Donner age group swim coach Carrie Utterback and former Columbus East and Indiana University football star Harry Crider.

“I’m absolutely floored because who am I, compared to them,” Utterback said. “I’m a little shellshocked right now. When Mark (Jones, director of Columbus Parks and Recreation) called and told me, the first words out of my mouth were, ‘Tomorrow is my birthday.’ So I appreciate the early birthday present from the Parks and Rec.”

Arthur and Freshour were nominated as a team by former North girls basketball coach Pat McKee. Arthur competed in boys gymnastics at North and has been a coach for the Bull Dog girls program since 1983.

“That was quite a call that I got today. It floored me. I’m absolutely honored to be put into a cagetory with (the other and previous winners). I’m almost speechless. It blew me away.”

Freshour, a Brown County native, has been a coach at North since 1988. A track athlete and cheerleader in high school, she did not grow up taking gymnastics, but was friends with an Indiana University gymnast in college, took coaching classes and became a middle school coach in 1979. She coached at Perry Meridian for three years before coming to North.

“I’m shocked, honored,” Freshour said. “It was very unexpected. Awards are definitely not why we do what we do with youth sports, but it’s very humbling, and I’m honored to be a part of the award for sure. I love everything I do in terms of the sport, the athletes, the families. It’s awesome. I have worked with some of the most amazing people, and I feel blessed to have had all the associations over the years.”

For most of their years with the Bull Dogs, Arthur and Freshour have been co-head coaches. Arthur was co-head coach with Kaitlyn Rediker this past season, while Freshour served as an assistant.

“Clearly, Sandy and Bob each bring a high level of knowledge and passion to teach the skills and techniques needed by their gymnasts,” McKee wrote in his nomination letter. “This is indicated by a run of success that included the 2016 state championship and 21 state-meet appearances since 1988. More importantly, both long have brought a big-picture perspective to their efforts, teaching elements of life to their athletes through sport. This is illustrated as the program has produced seven IHSAA Mental Attitude Award winners during their tenure.”

Utterback, meanwhile, helped organize the ToeToken running program at Parkside Elementary from 2008-17. She also has been a youth track and swimming coach and was the Donner Swim Club president in 2012. 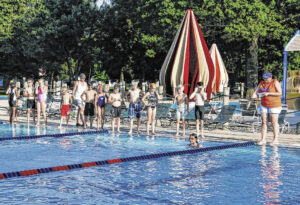 Carrie Utterback, right, signals for triathletes to start the swimming portion of the Columbus Youth Triathlon as at Donner Park, Saturday, June 30, 2018.

“Carrie has been nothing but professional during swim meets,” said Michelle Genter, who nominated her. “Swimmers and parents look to her as a true leader in the sport, never wavering in the integrity and fairness she is known for. She gives her support to every single athlete — not just the most gifted or the fastest. Carrie is quick to acknowledge hard work and accomplishment of other teams’ competitors, as well.”

Crider won the state’s Mr. Football for offensive linemen and the IHSAA Mental Attitude Award for Class 5A football after leading East to a state runner-up finish in 2016. He also played basketball and baseball for the Olympians before going on to play four years of football at IU.

An honorable mention All-Big 10 center for the Hoosiers, Crider signed as a free agent last spring with the NFL’s Philadelphia Eagles. He spent time in training camp with the Eagles and on the practice squad of the Eagles and Denver Broncos before stepping away from football. 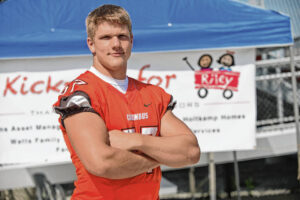 Columbus East center Harry Crider raised money for Riley Hospital for Children, where he was diagnosed with Type 1 diabetes at the age of 10 at Riley. He is pictured at the Columbus East football field on Friday, Aug. 19, 2016.

Crider, who was diagnosed with Type 1 diabetes at age 10, raised $16,000 through his senior project at East, a fundraising event for the Riley Children’s Foundation. While in college, he continued to volunteer at Riley Hospital for Children at IU Health, read to local elementary school children and has bagged food for Blessings in a Backpack.

As a senior at IU, Crider was named to the Rimington Trophy Watch list for the nation’s top center. He also was nominated for the Wuerffel Trophy and the Campbell Trophy, both of which recognize on- and off-the field accomplishments, and was a semifinalist for the Jason Witten Collegiate Man of the Year Award. He also was selected for the National Football Foundation & College Hall of Fame’s 2021 NFF Hampshire Honor Society, which includes players who maintained a cumulative 3.2 GPA or better throughout their college careers.

Crider has returned to Columbus and works for Federated Insurance, a business, life and disability insurance company. He is thrilled to win the Cramer Award.

“It’s obviously a huge honor,” Crider said. “Being a Columbus guy, I’ve seen the winners in the past. It’s one of Columbus’ most prestigious award. It’s quite an honor.”

For Powell, fighting inflation might mean sinking the world

On August 31, the Centers for Medicare and Medicaid released a proposed rule designed to make it...
Health Insurance

On August 31, the Centers for Medicare and...

On August 31, the Centers for Medicare and...